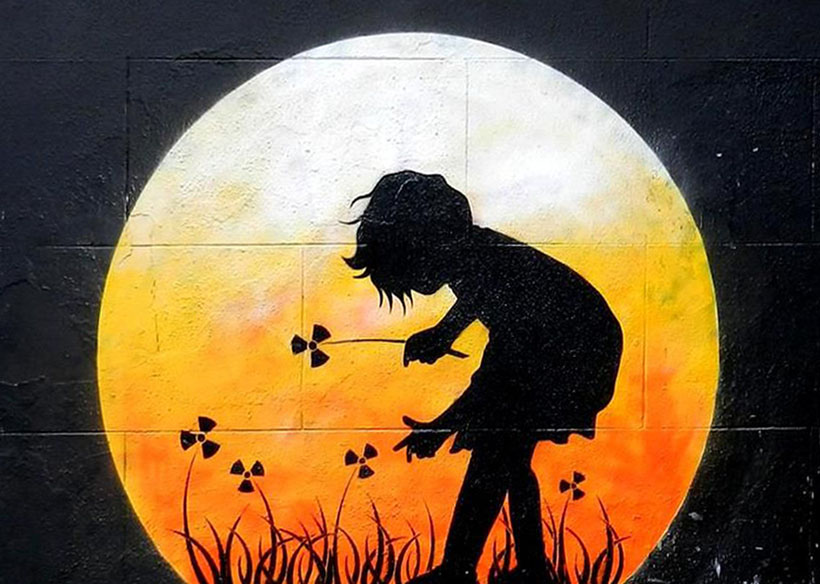 Artwork by Otto Schade: Say it with Flowers (used with permission)

Frank von Hippel of the Program on Science and Global Security, Jungmin Kang and Masafumi Takubo have co-authored the new book Plutonium: How Nuclear Power's Dream Fuel Became a Nightmare. It is published by Springer.

The book starts with the early discussions of nuclear power during the secret US World War II nuclear-weapon project. At the time, it was believed that uranium deposits rich enough to fuel conventional nuclear reactors would be very scarce. Plutonium breeder reactors cooled with liquid sodium were therefore invented to convert the abundant non-chain-reacting uranium isotope U-238 into chain-reacting plutonium. Much more uranium was found and sodium-cooled reactors proved to be costly and unreliable, but the industrialized countries had already launched major programs to recover plutonium from spent nuclear fuel to provide startup fuel for breeder reactors and the US and France were helping other countries to start their own programs.

In 1974, India tested a nuclear explosive with some of the plutonium it had recovered with US Atomic Energy Commission assistance. The White House reassessed and decided encouraging plutonium programs had been a dangerous mistake. The nuclear establishments in France, Japan, Russia and the UK decided to continue to press forward, however, and have each accumulated a stock of separated civilian plutonium sufficient for about ten thousand nuclear explosives and a major radioactive waste management problem. This legacy poses a profound challenge to future generations.

The UK has finally stopped reprocessing but China and India are traveling down the same track – launching breeder-reactor-development programs that are not likely to produce economically viable nuclear-power, but rather additional large stocks of weapon-usable separated plutonium.

A second nightmare legacy in a number of countries is an accumulation of spent fuel at nuclear power plants because reprocessing programs have either stopped or proceeded more slowly than originally planned. The nuclear utilities found that the least costly way to store this fuel was to pack about five times more spent fuel into the reactor cooling pools than the pools were designed to hold. This has created a situation in which a loss of water in a pool would result in a spent-fuel fire and a hydrogen explosion that would release one hundred times as much long-lived radioactivity to the atmosphere than the core meltdowns at Fukushima.

The recommendations are quite simple:

Frank von Hippel is a senior research physicist and professor of public and international affairs emeritus with Princeton’s Program on Science & Global Security which he co-founded.

Jungmin Kang served as chairman of South Korea's Nuclear Safety and Security Commission and is a former postdoc at the Program on Science and Global Security.

Masafumi Takubo is a Tokyo-based researcher on Japan’s nuclear policies and a consultant for Princeton University’s Program on Science and Global Security.