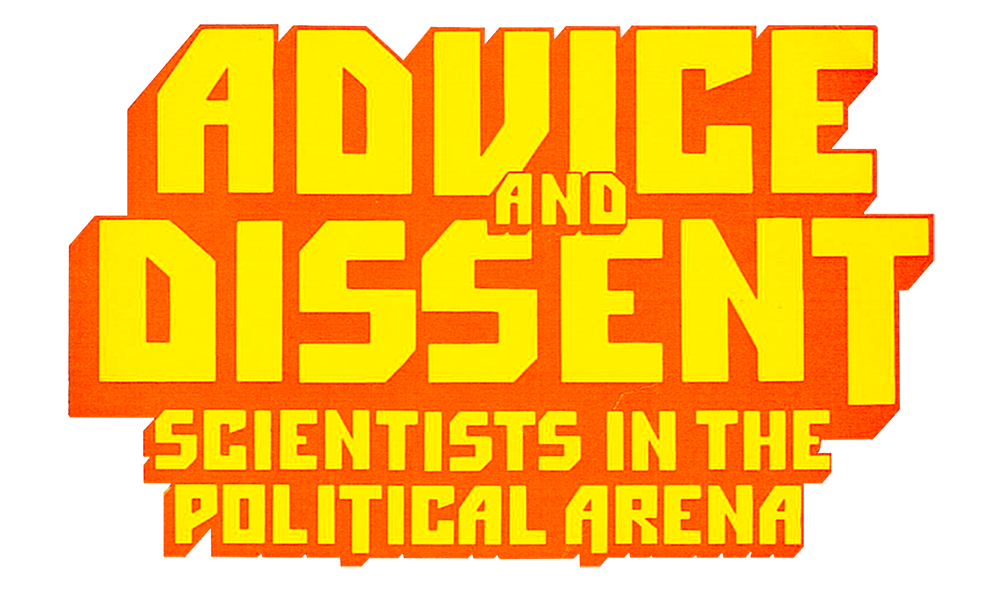 The common man bas never been less in control of his life and livelihood than he is today. Whether confronted by the threat of atomic annihilation or something as trivial as a balky home appliance, almost all of us must place our trust in the hands of the relevant specialists--the people who are ultimately responsible for the design and repair of guided missiles, television sets, and the other complex products of our technological civilization. As our common pool of scientific knowledge increases, the ignorance and powerlessness of each individual increases correspondingly. We can neither smell plutonium nor taste asbestos: the detection of many dangerous materials requires specialized equipment. Each of us must rely upon legions of scientists and engineers for assurance that nuclear weapons and nuclear reactors will not explode accidentally, that adequate fuel will be available to keep us warm and moving and employed, that the chemicals we add to food and water in order to poison our microbial and insect enemies will not poison us as well, and so on through almost every aspect of our lives.

It is evident that the way in which technical experts make their services available to society can significantly affect the distribution of political power. If scientists give government and industry the exclusive benefit of their expertise, they may inadvertently be contributing to the creation of a technological dictatorship in which the uninformed citizen must accept whatever these organizations tell him is in his interest. If, on the other hand, scientists make available to the citizen the information and analyses he needs for the defense of his health and welfare, they can help bring about more open and democratic controls on the uses of technology.

This volume examines how scientists have been carrying out their political responsibilities, in the hope that we may learn both from past mistakes and from past successes. The study grew out of the authors' examination of a number of the most important technological issues that have erupted into national debates during the past few years, including the supersonic transport (SST) project, the antiballistic missile (ABM) program, the safety of the insecticide DDT and the herbicide 2,4,S-T, the decision to take. cyclamates out of food, the dangers inherent in the United States' chemical and biological weapons programs, and the safety of commercial nuclear power plants. In studying these issues, we were shocked to find that in every case much of the most important technical advice had been ignored-or worse, publicly misrepresented-by government officials. We were also surprised to find that the final outcome of these controversies was in each case much more influenced by the publicly available information and the public activities of scientists than by the confidential advice given to government officials.

We hope that this book may be useful to two overlapping groups: (1) those actively concerned with the threats posed to society and the environment by an inadequately controlled and explosively developing technology; and (2) scientists who are seeking ways in which they might contribute to the abatement of the multitude of resulting crises.

To the first group, the concerned citizens, we hope to carry the message: Be skeptical when a government agency cites the opinions of unnamed experts about the safety or necessity of its programs as a substitute for openly discussing the facts and countervailing considerations in a public forum. Demand that the facts and analyses be put on the table and find some independent scientists to check them out with you. We would also like these people to be aware of how important it is to have independent scientists participating in any public challenge to federal policy for technology. The challengers must understand the issues and be sure of their facts and arguments if they are to be effective and not easily discredited.

To the second group, the concerned scientists, we would like to say: Writing advisory reports for government agencies is important but not enough. You must be willing to carry your message to the public-by allying yourself with concerned citizens groups, if necessary, and using political and legal pressure to compel government and industry to behave responsibly. We would also like to make scientists aware that they need not be frightened by the enormous reservoir of expertise available to the federal government. Small numbers of outsiders have had great impact. When the administration in power commits itself to a senseless or dangerous policy, it can no more justify its actions by appeal to its experts than a pilot can justify flying his plane into the ground by quoting the readings on his instruments.

Confidential advice can too easily be ignored. But when a scientist effectively takes his concerns to the public, and these concerns relate to a clear danger to the public health and welfare, then government officials must listen. The challenge to the scientific community--and to the nation at large--is thus to strengthen the government's science advisory system by making it more open and independent, and to encourage and support the "public interest science" movement which has already contributed significantly toward bringing technology under democratic control.

Front Matter and Table of Contents

Chapter 2: The Supersonic Transport: A Case History in the Politics of Technology

Chapter 3: The Uses and Limitations of Science Advisors

Chapter 4: Not the Whole Truth: The Advisory Reports on the Supersonic Transport

PART III: Responsibilities of Science Advisors in a Democracy

Chapter 9: Toward an Open Advisory System

Chapter 10: The Battle Over Persistent Pesticides: From Rachel Carson to the Environmental Defense Fund

Chapter 12: Watching the Federal Government in Colorado: The Colorado Committee for Environmental Information

Chapter 16: When Outsiders Can Be Effective

Chapter 19: The Choice for Scientists and Society